These past couple weeks have continued to prove exciting in all senses, an eye-opening experience. Every day is provides for a fresh opportunity to adventure, meet new Chileans, and get a further glimpse into the incredibly diverse Chilean culture. Whether it’d be riding the metro from Viña del Mar to Valparaíso every morning and witnessing the drastic class stratification gap within Chile (where 20% of the country’s populations controls 60% of total wealth), exploring Valpo’s graffiti-ridden alley-ways, willing myself not eat all the dominating unhealthy sugar-infused foods, or standing my own to pay fair public transportation prices, each day has supplied it’s own addition to my assorted experiences in Chile. 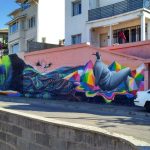 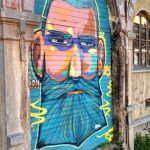 Through my busy weekdays and weekends, now filled with classes, homework, and personal travel throughout Chile, it’s challenging to squeeze in lacrosse when I can. While trying to accommodate my own conditioning and weight lifting needs on a regular basis in a country where physical health, consistent exercise and healthy eating are not high priorities, I also persist in searching for ways to inject sports exercise (specifically lacrosse) into my interactions with Chilean youth and adults. Each attempt to teach lacrosse to a different group of Chileans holds its own challenge- linguistically, socially, and culturally. Nonetheless, after the inevitable initial hesitation and apprehension to picking up a toy that most Chileans have never felt or seen before, and accepting instruction from a bushy-haired gringo who speaks Spanish at a seemingly first-grade level, the smiles always break through, vulnerability flourishes, laugher becomes contagious, and most are already asking for more.

Two weekends ago, I got another chance to get out with Valpo Surf Project for a day with the kids- unfortunately we were unable to get a car to take the surf boards to the beach, so instead we went to a local Valpo beach and played lacrosse and soccer! The kids are so intrigued by the sticks and the way you fling a ball out and get to push each other around (a reflection of my initial interest in the game). Surprisingly or not, it’s the girls who are more willing to pick up the sticks and have a toss after all!

Apart from playing with the VSP kids each weekend, when the extended family of my host parents comes over to our house for lunch or “once,” the grandchildren are always eager to break out the lacrosse sticks and 3x nets to play and fail to let me finish my food before a they shove a stick onto my lunch plate. To me, this surely is a great problem to have as they all have moved passed the fact that they struggle to hold the ball in their stick and launch the ball at a controlled speed in my direction, and instead simply smile and continue ask me how to cradle, how to control the ball’s release, and pull in their other cousins to play out on the back terrace. Ultimately it’s not just the kids who get a kick out of tossing the ball around, adults certainly get intrigued and dragged in as well. 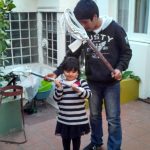 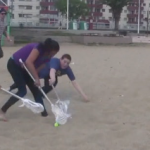 This past week (9/18-9/22) is Chile’s independence celebrations (Fiestas Patrias) and certainly proving to be the country’s time to shine- a week full of friends, family and food instead of just one day (It seems Chileans have the right idea). No Chilean goes this week without a family asado (BBQ) or a trip to Las Ramadas/ La Fonda… “Ramadas feature a dance floor, music, and tables to eat. Fondas, or refreshment stands, offer a wide variety of Chilean food including empanadas, anticuchos (shish kabobs), chicha (alchoholic drink), and more” – pretty much a big fair with people of all types including tourists, dancers, overly drunk teenagers/flaites, and everyone else. For me, last week was an incredible cultural immersion filled with many chances to eat great food (mostly empanadas and red meat), drink terremotos and chicha, fly kites, and attempt to dance the Cueca, Chile’s national dance. Through all the family asados, I still managed to bring the lacrosse gear out to park. As my host brother and I began to toss around, the adults merely casted glances at us, confused and stunned, yet fascinated by the unfamiliar metal rods and weight of the lacrosse ball. Eventually a group of adults joined in and proceeded to play some form of dodge ball in the middle of the park, attempting to throw tennis balls through the soccer goals. No matter the variation or interpretation, it’s motivating to see how seductive lacrosse is proving to be even when I struggle to stutter in explaining the rules of the game, the state of the sport in the USA, and its Native American origins. 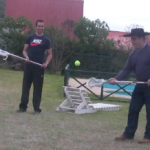 EVERYONE GETTING INTO LACROSSE!

The obviously enticing nature of this game is also beginning to give me some good ideas for how to hone-in a specific research question for my independent study project that I will have an entire month to complete in November. As a general idea, I am currently interested in comparing two contrasting youth socioeconomic classes in a physical educational environment and an extra-curricular environment and observe how the kids handle the transition of learning a new sport and experiencing change in general. By teaching lacrosse to, observing and interviewing kids, administrators, professors, and coaches, I hope to inductively conclude how the Chilean people may hope to successfully initiate any type of societal change- through its youth. Chile as a whole is filled a widespread revolutionary desire to change many negative aspects of their culture, that in large part, have been brought upon by Pinochet’s Golpe de Estado (military coup) and subsequent gruesome and torturous military dictatorship from 1973-1990. A few of these aspects include improved healthcare, education, socioeconomic development and enhancement, as well as a more present healthy living/food and exercise culture. I expect to use lacrosse as an observational tool to measure Chilean youth’s initial intrigue and excitement, continued motivation and perseverance, and resulting social interactions (collaboration vs. competition), due to newly induced change- aka lacrosse.

This site uses Akismet to reduce spam. Learn how your comment data is processed.